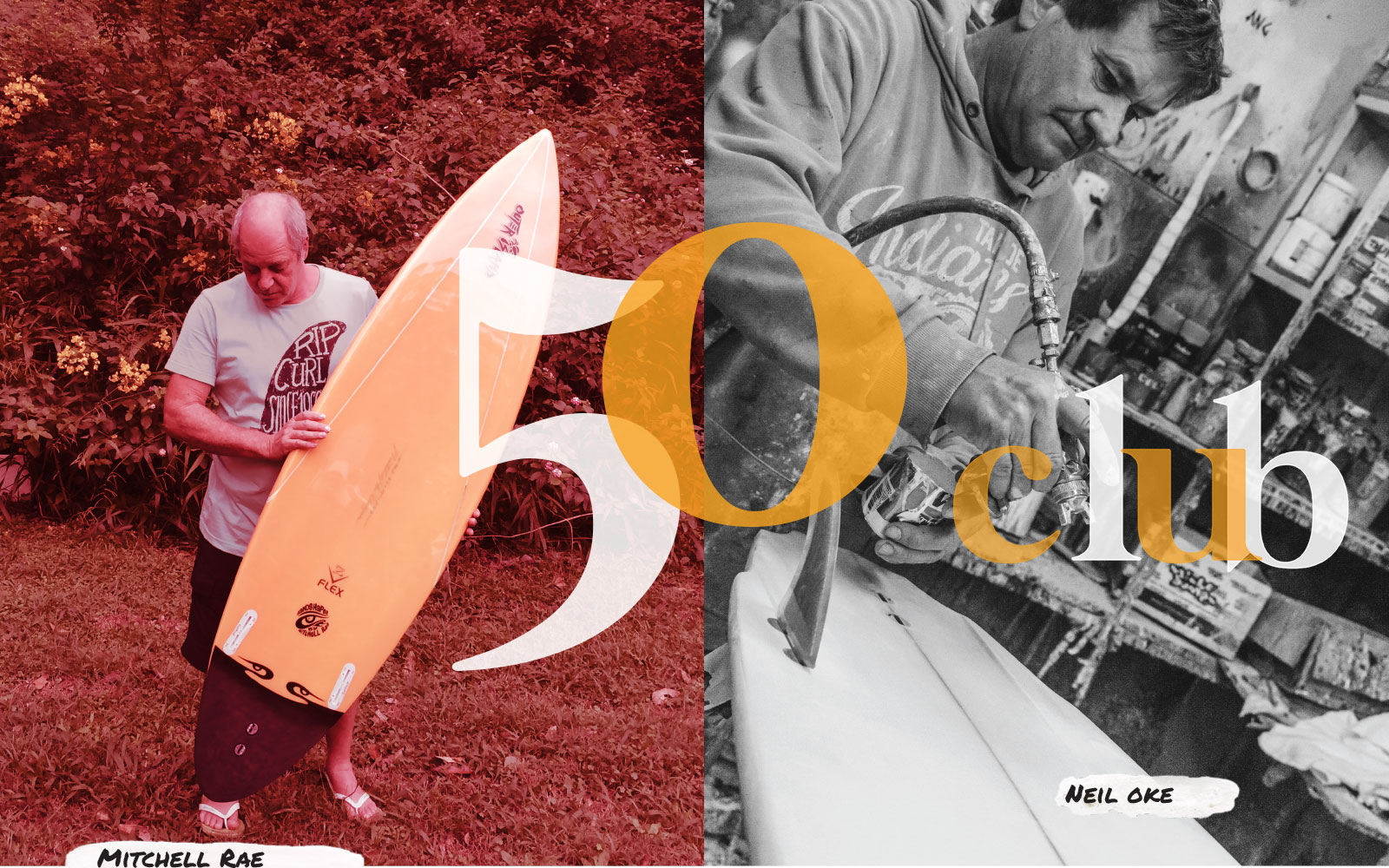 50 editions of Smorgasboarder is not a bad achievement. to shape surfboards for over 50 years however, that’s another level altogether. So, in this milestone edition of our mag, we thought it fitting to shine a light on four guys who have been an integral part of our mag through the last 10 years. All have clocked up 50 years on the planer, each with a slightly different approach to their profession.

Jack Knight today plies his trade on the Gold Coast first learnt his craft watching the likes of Neil Purchase, Peter Cornish and Bob McTavish whilst working for famous Northern Beaches surf brands such as Keyo, Shane and Bennett Surfboards. It was an era of experimental designs but namely single fins and it would appear his shaping journey has now come full circle.

Jack still crafts a mean performance shortboard under his label Jack Knight Surfboards, skills he honed shaping boards for 10 years under the feet of pro surfer Glen Winton, but it is the Harvest label he formed with son Aaron that is increasingly taking centre stage. Harvest’s focus is on beautifully handcrafted, bespoke, vintage-inspired boards. Single fins, twin fins, mid-lengths and logs are the order of the day and are tailored to suit a more graceful style of surfing with long drawn out carves.

Harvest’s hallmark shape without doubt however is a channel bottom single fin that Jack learnt to craft in the 1970s from Jim Pollard, the board’s original inventor. Said Jack of the design, “The channelled bottom acts as an accelerator to give you speed and lift and acts like a hydrofoil to pull you through turns. It is a design that must be handshaped and can’t be replicated by a machine.”

With everything handmade, Jack’s focus is on quality over quantity. He is a perfectionist at heart.

Mitchell Rae of Outer Island Surfboards also hails from Sydney’s Northern Beaches, and like Jack, is firmly fixated on quality over quantity too. He is an artisan of the highest order creating boards that literally come alive like a living object by virtue of controlled flex. Mitchell explains his pursuit.

“Living creatures change their shape and body position to perform different tasks. Fish can change the shape of their fins in motion, altering aspect and shape while hunting prey, extending fins to change direction at high speed, flattening them down to reduce drag. Sea birds will extend their wings to soar, tuck them in to dive, extend them to perform a high-speed turn. I considered why a surfboard shouldn’t do the same? To me flex is the simplest way to give an inanimate object life.”

Mitchell explains most surfboards have an amount of flex but it’s just not necessarily in the right place.

“I’m looking to control the flex, put it where it belongs. A standard surfboard is based on a set of curves that remain constant, such as rocker, concave and vee.  You can only surf what is possible with that fixed set of curves. That is the limitation of that design.

“To me there are two distinct aspects I felt were integral to flex design: Variable curve and Reflex, or ‘spring back’. My boards are flexible forms that change shape whilst in motion, melding to the shape of the wave then releasing generating propulsion and drive. The acceleration generated is addictive.” 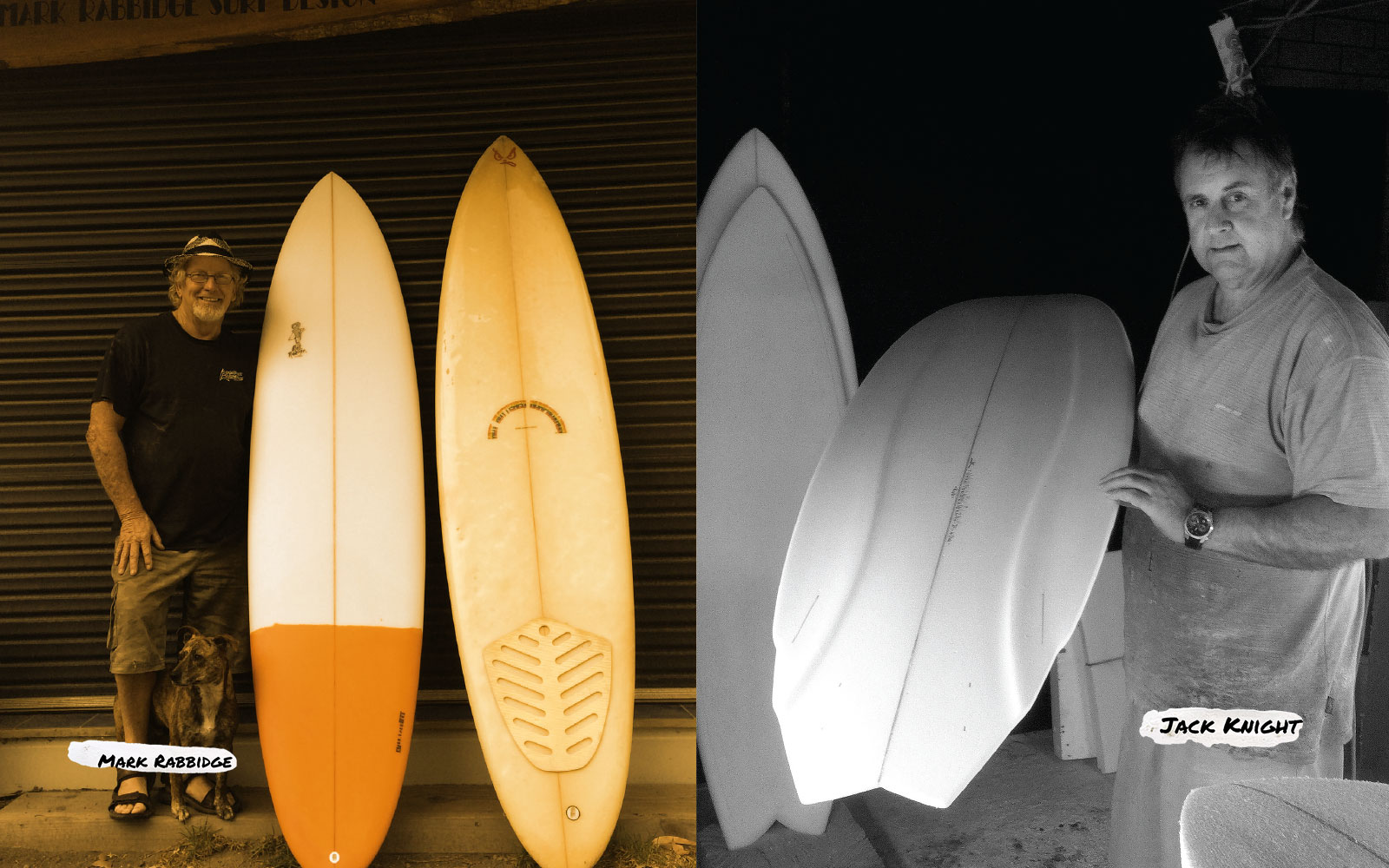 Good friend Mark Rabbidge is another who hails from the Northern Beaches and is no stranger to the world of high-performance surfboards either. Through the years Mark has shaped boards for the likes Tom Curren and former world champ Pam Burridge, now his wife. His approach today is on crafting boards that are fun, that deliver that euphoric feeling of truly riding a wave.

“I have been riding waves for over 60 years. I have spent about two years riding surfboards and the rest of the time riding waves.

“Surfing to me is about feelings. It’s about that moment when you pull off the wave and go, ‘F*#k that felt unreal. That is what surfing is all about to me. So I create boards that emulate that feeling. And given that conditions vary from day to day, break to break, and ability from surfer to surfer, I craft boards to suit, and that means everything from 12ft gliders to shortboards, finless, asymmetricals and everything in between.

Again, his board shaping skills are next level. He’s a freak and we love him.

For Neil Oke of Oke Surfboards down in the south-eastern Melbourne suburb of Braeside, the board building game has always been about family. Neil joined his brother Alan in his surfboard business at age 16. Not too many years later Neil lost his brother through the most tragic of circumstances. Despite the grief he soldiered on with the business. Through the course of time Neil’s sons have stepped into the business and have more or less taken over the reigns – Dan a deft glasser and Rory as head shaper. Neil or “Chok” as he is affectionately known takes more of a back seat. Says Rory (laughing), “Yeah, he just basically gets in the way nowadays.”

That’s the Oke family for you. Constantly taking the piss out of one another, laughing, having fun and spreading the stoke for all and sundry who come into the factory. It’s why so many of their loyal customers consider themselves extended family.

Despite the wry humour you can tell Neil is as proud as punch of his sons.

“The boys get on really well and I am so proud of what they’re doing and how they are carrying the business forward. Rory has developed all these new shapes and Dan’s resin work is amazing.

“As for the boards we make, well, we really do make everything. People rely on our expertise and we’re happy to be charged with that responsibility. We love them and want them to have a nice board.”

As for us here at Smorgasboarder, we certainly love these four guys more than words. We can’t thank them enough for all their support of our humble little surf mag through the years.